DANA is going to organise a Training Course focussing on various Mental Health Issues in Adolescence. The Course on Web-Platform will be comprised of 10 sessions, 2 hours each, on Saturdays and Sundays between 7.30 & 9.30 pm with effect from  13th February, 2021.  A brief outline is as follows:

Wild Adolescence
An adolescent is a wild horse. He is moving out from his childhood and is entering adulthood. Though he does not want to be treated like a child, yet he has not attained the maturity of an adult. Parents and other caregivers are at a loss how to deal in such a situation.
This course organized by DANA will help you to understand:
* What is adolescence.
* In what respects an adolescent is different from a child as well as an adult.
* How is he influenced by his situations.
* What are the hazards in his life.
*How do the parents and caregivers deal to promote optimum growth.
The classes will be held every Saturday and Sunday, starting from , each class will be of duration 1.5 hours. The classes will be conducted by distinguished and experienced mental health professionals. There will be a time for interactions to clarify doubts at the end of each class . Certificates will be given after successful completion of the course.For information please contact DANA 9051252231 & 9830679890 between 12 & 8 pm. 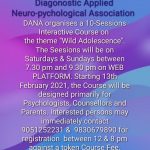 This year’s World Mental Health Day, on 10 October, comes at a time when our daily lives have changed considerably as a result of the COVID-19 pandemic. The past months have brought many challenges: for health-care workers, providing care in difficult circumstances, going to work fearful of bringing COVID-19 home with them; for students, adapting to taking classes from home, with little contact with teachers and friends, and anxious about their futures; for workers whose livelihoods are threatened; for the vast number of people caught in poverty or in fragile humanitarian settings with extremely limited protection from COVID-19; and for people with mental health conditions, many experiencing even greater social isolation than before. And this is to say nothing of managing the grief of losing a loved one, sometimes without being able to say goodbye.

The economic consequences of the pandemic are already being felt, as companies let staff go in an effort to save their businesses, or indeed shut down completely.

Given past experience of emergencies, it is expected that the need for mental health and psychosocial support will substantially increase in the coming months and years. Investment in mental health programmes at the national and international levels, which have already suffered from years of chronic underfunding, is now more important than it has ever been.

This is why the goal of this year’s World Mental Health Day campaign is increased investment in mental health.

Daylong worksop on ‘Mid-life Crisis & its Management’ will be held at DANA premises on Sunday, the 22nd December, 2019. 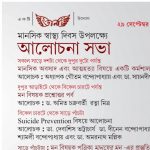 On the occassion of Mental Health Week, Daylong workshop on ‘Suicide & its Prevention’ will be held on Sunday 29th September 2019 at DANA. Like previous years Mental Health Book Fair will also be organised on the day. Dr Gautam Bandyopadhyay will be key speaker in the workshop.

DANA organizes  a Debate on ‘Future of Marriage’ on Monday, the 17th June 2019 at 6 pm at Jibananda Sabhaghar in Bangla Academy Complex. The speakers will be Pracheta Gupta, Binayak Bandyopadhyay, Dr Amit Chakraborty, Dr Gautam Bandyopadhyay, Krishnasarbari Dasgupta and Dr Basabi Chakraborty. Ratna Mitra will be the Moderator.

DANA’s recent book on ‘ Marital Relationship’ will be released on this occassion.

All are invited. Invitation cards are available at DANA’s Reception. 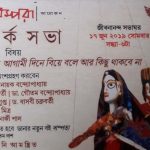 Daylong workshop on Parenting will be organised at DANA on Sunday, 26th May, 2019. The key speakers will be Mohit Ranadip, Psychiatric Social Worker and Mental Health Activist and Ms Rita Roy, Psycologist and Counsellor. Dr Gautam Bandyopadhyay and Dr Amit Chakraborty will take part in the Panel Discussion in the second half of the Workshop.

Daylong workshop on ‘Social Victimization’ will be organised at DANA on Sunday, 28th April 2019.

There are many myths and misconceptions about sexual assault and abuse in our society – most of which blame the victim/survivor. Myths prevent survivors from getting the help they need, and rarely hold the perpetrator accountable for his/her actions. These ideas are often based on systems of oppression such as sexism, racism, heterosexism or other forms of power.
Have you heard any of these dangerous examples?

MYTH: Most sexual assaults occur by deranged men who jump out from behind the bushes to assault women.
FACT: The majority of survivors (up to 85% in some studies) indicate that the person who assaulted them was someone they knew, such as a boyfriend, friend, family member, acquaintance, or service provider.

Why do we think the myth is true? It’s easier to believe that a stranger, and not someone you know and trust, would hurt you this way. Stranger assault is also more widely reported in the media and to the police, which perpetuates this idea.

MYTH: If a woman is wearing revealing or sexy clothes, she wants sex.
FACT: Every woman has the right to wear what she wants, and to choose her sexual partner. The idea that someone “asked for it” because of what she was wearing blames the victim instead of the perpetrator. You have to ask if someone wants to have sex.